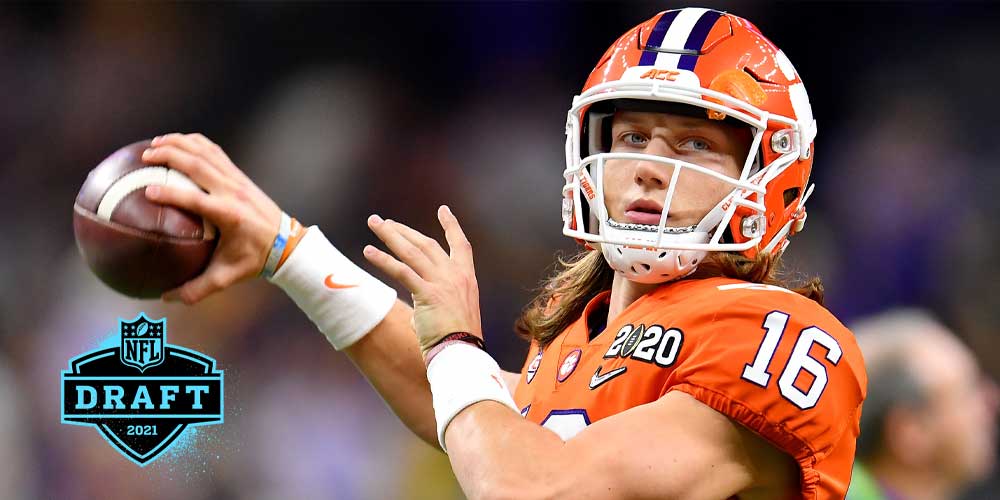 CLEVELAND - With the NFL Draft beginning on Thursday, there are loads of different NFL Draft prop bets that bettors can take advantage of.

NFL sportsbooks have specific prop bets on Trevor Lawrence and how he will appear during his draft process. There are odds on who he will embrace first when drafted and even what he will be wearing.

Who Will Trevor Lawrence Hug First?

These NFL Draft odds have Trevor Lawrence embracing his wife first upon being drafted. If there is one thing to note here, it is that during the draft process, the draftees are usually seated in between either their parents or their mother and significant other on each side.

In this case, Lawrence is sure to be seated next to his recent wife, Marissa Mowry. The only case that backs up Mowry being the first person that hugs Lawrence after being drafted is both of their social media accounts as they post with each other a lot. Also, being that their wedding was very recent as well could be another indication that Lawrence would want to hug his wife first.

With that said, bettors can take the short but profitable odds on Lawrence hugging his wife first.

Bettors can take the easy money here betting that Lawrence will not shed a tear when his name is called during the draft. It is no secret that Trevor Lawrence will be the number one overall pick in the draft, which in most cases, can be an emotional event in someone’s career.

In Lawrence’s case though, he has been in the spotlight throughout his entire high school and collegiate career from committing to Clemson, winning and losing National Championships, and even getting married.

The fact that Lawrence has gone through all of these events in his career and has not been seen crying or getting emotional during any of them should be the only argument needed to bet on the favorite.

Will Trevor Lawrence Be Wearing A Tie?

The only thing to note here that backs up Lawrence not wearing a tie during the NFL Draft is the fact that he will not be attending the draft process in Cleveland and will be doing it from his own home.

Being that he will be going through the process at home, it leaves room for a more casual outfit rather than dressing in a suit and tie at the actual draft.

If Lawrence were attending the draft in person, the line would surely be shifting in the opposite direction. That said, bettors should be slamming the favorite here by all means necessary.