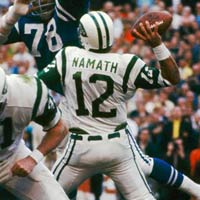 Whether fair or not, the vast majority of Super Bowl winners are remembered primarily by their quarterback, as evidenced by the fact that quarterbacks make up 31 of the 56 Super Bowl MVP award winners. Nearly every franchise with a realistic claim to being a “dynasty” (defined here as two or more Super Bowl wins within a five-year period) has been led by a Hall of Fame quarterback. Taking it one step further, only two teams in the history of the NFL have made two Super Bowl appearances in five years without a Hall of Fame or future Hall of Fame quarterback at the helm—Joe Gibbs’ Redskins (Mark Rypien and Doug Williams), and Tom Flores’ Raiders (Jim Plunkett). They were joined in 2020 by Chiefs’ quarterback Patrick Mahomes.

Bart Starr’s Packers won the first two Super Bowl games ever played. Roger Staubach’s Cowboys established Dallas as “America’s team”. Joe Montana and Terry Bradshaw each went 4-0 in the Super Bowl (with the 49ers and Steelers, respectively), and Montana’s historic Super Bowl led many to declare him the best quarterback in NFL history. In the 1990s, Troy Aikman won three Super Bowls with the Cowboys, earning himself a place in Canton despite a lack of elite production. After Y2K, Tom Brady essentially stamped his name on the Lombardi Trophy, with seven wins and five Super Bowl MVP awards since 2002. The only other quarterbacks to win more than one Super Bowl since the turn of the century are brothers Eli and Peyton Manning, with two each.

Whether wagering on Super Bowl QBs to win the regular season MVP award or betting on them to win Super Bowl MVP near the start of the NFL playoffs, there are bonuses to help every bettor. Online sportsbooks with Super Bowl wagers offer welcome bonuses for new players and reload bonuses for existing players. These bonuses make potential payouts even larger for all QB betting for the NFL regular and postseason. The total bonus credits and limitations for all of these bonuses differ depending on the chosen sportsbook.

Bovada is one of the best online sportsbooks for betting on Super Bowl QBs and the betting site has a wide range of limits for deposits. The fees and deposit processing times vary and can be found below with the limits for each method.

For any winnings from betting on Super Bowl QBs, Bovada allows same-day payouts that are secure and have been trusted for many years. Bitcoin and other cryptos are the most common and trusted withdrawal method because the payouts process within 24-48 hours and there are no fees. The limits for crypto and all of the other methods can be found below from Bovada.

Player props for QBs in the Super Bowl are some of the most popular bets to make considering they see the most action in the game. You’ll be able to find odds on them from any aspect including their passing yards, passing touchdowns, total completions, total attempts, and much more. In addition to just quarterback player totals, you can also bet on quarterback futures such as the Super Bowl MVP odds.

Which Quarterback Has Won The Most Super Bowls?

Patriots’ quarterback Tom Brady is in a class of his own when it comes to Super Bowl success. He won his first Lombardi Trophy in the 2002 Super Bowl, upsetting the “Greatest Show on Turf” Rams to bring the Patriots their first-ever Super Bowl title and claiming the game’s MVP award. He would add additional titles in 2004 and 2005 before a lengthy hiatus. Ten years later, in 2015, Brady’s Patriots overcame the Seahawks’ legendary “Legion of Boom” defense for his fourth ring, tying Joe Montana and Terry Bradshaw for the most all-time. In 2017, Brady led a record 25-point comeback in the Super Bowl to defeat the Atlanta Falcons and claim his record fifth ring. He padded his lead with a sixth and seventh championship in 2019 and 2021, except his last one came with the Tampa Bay Buccaneers, not the New England Patriots.

How Many Quarterbacks Have Won Multiple Super Bowls?

In the history of the Super Bowl, there have been 12 different quarterbacks who have won multiple titles, accounting for almost half of all Super Bowl wins (24). 9 are enshrined in the Pro Football Hall of Fame—Starr, Griese, Stabler, Staubach, Bradshaw, Montana, Young, Aikman and Elway while two more (Brady and Peyton Manning) are surefire first-ballot inductees when they finally become eligible.

Eli Manning is far from a guarantee but his two Super Bowl wins against Brady’s mighty Patriots ensure that he has a puncher’s chance. McMahon and Simms are conspicuous outliers, and Aikman and Eli exist around the fringes of true greatness, but winning multiple Super Bowls is a nearly guaranteed way to put yourself on the shortlist of all-time greats at the position. While Hall of Fame inductee and seven-time Pro Bowler Steve Young won a total of three Super Bowl rings, only one of those rings came with Young as the starting quarterback; he won the other two rings as fellow Hall-of-Famer Joe Montana’s backup.

Of the 14 men to win multiple Super Bowls, 9 are enshrined in the Pro Football Hall of Fame—Starr, Griese, Stabler, Staubach, Bradshaw, Montana, Young, Aikman and Elway. Two more (Brady and Peyton Manning) are surefire first-ballot inductees when they finally become eligible. Eli Manning is far from a guaranteed induction thanks to a precipitous drop in play in the latter half of his career, but his two Super Bowl wins against Brady’s mighty Patriots ensure that he has a puncher’s chance. McMahon and Simms are conspicuous outliers, and Aikman and Eli exist around the fringes of true greatness, but winning multiple Super Bowls is a nearly guaranteed way to put yourself on the shortlist of all-time greats at the position. While Hall of Fame inductee and seven-time Pro Bowler Steve Young won a total of three Super Bowl rings, only one of those rings came with Young as the starting quarterback; he won the other two rings as fellow Hall-of-Famer Joe Montana’s backup.

Quarterbacks Against The Spread In The Super Bowl

QBs To Win The Super Bowl As An Underdog

Has Any Quarterback Won the Super Bowl with Different Teams?

Peyton Manning was the only player to start and win Super Bowls with two different teams, doing so with both the Colts (2007) and the Broncos (2016). After his second Super Bowl, he announced his retirement—a fitting end for possibly the best to ever play the position. However, Tom Brady joined Manning in yet another amazing NFL quarterback Super Bowl stat. After winning six with the Patriots, Tom Brady won a seventh but with the Tampa Bay Buccaneers in 2021. Despite a new team, Brady's Bucs became favorites and remain there.

A few other quarterbacks have come close. Craig Morton played in Super Bowls with both the Cowboys and Broncos but lost both. Kurt Warner came close, winning one Super Bowl with the Rams in 2000 and coming up just short with the Cardinals in 2009. Former MVP Earl Morall also lucked his way into this feat, winning as the backup quarterback to Johnny Unitas in Baltimore and Bob Griese in Miami. Current 49er and former Patriots backup Jimmy Garoppolo could put his name alongside Morall with a win this year. He won rings with the Patriots in 2015 and 2017.

How Many Quarterbacks Have Won the MVP and the Super Bowl in the Same Year?

Who Are The Youngest Quarterbacks To Win The Super Bowl?

Who Are The Oldest Quarterbacks To Win The Super Bowl?

How Many Super Bowl Winning Quarterbacks Threw For 4 Or More Touchdowns?

Quarterbacks To Win A Super Bowl Without A Passing Touchdown

Quarterbacks To Throw 2+ INTs And The Win Super Bowl

Turning the ball over in a football game is not a part of how winning football is played but some Super Bowl quarterbacks were able to throw to picks and still get the win. The most interceptions thrown in a Super Bowl game sit with three from Terry Bradshaw in Super Bowl 14. Bradshaw still managed to throw for 309 yards and two touchdowns as well though.

Quarterbacks Who Won The Super Bowl Without Being Sacked 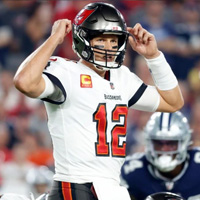 Brady Does It Again: Against the man everyone thought would dethrone him, Patrick Mahomes, Tom Brady leads his Tampa Bay Buccaneers to a 31-9 rout of the Chiefs. This is Bradyâ€™s seventh Super Bowl ring, the most for any QB. 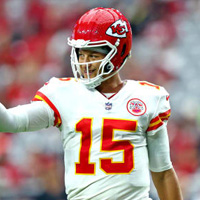 Mahomes Makes His Mark: Patrick Mahomes leads his team to overcome a double-digit San Francisco 49ers lead, with Kansas City entering the fourth quarter down 20-10 and winning the game 31-20. 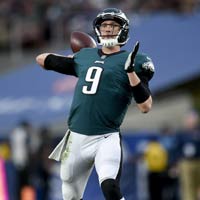 Philly Special: Eagles’ quarterback Nick Foles had an all-around incredible Super Bowl against the Patriots, but the play that will be remembered forever was his touchdown catch on a goal-line reverse pass right before halftime. 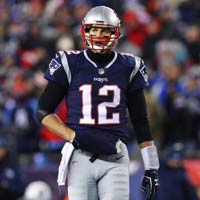 28-3: Trailing the Falcons 28-3 with 2 minutes and 12 seconds left in the third quarter, Tom Brady led a furious rally to tie the game up and send it into overtime. The coin toss gods showed Brady their favor, and the Patriots would score a touchdown on the first possession of overtime to clinch the win and his record fifth Super Bowl ring. 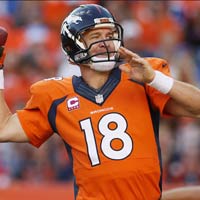 Manning’s Swan Song: Despite a pedestrian offensive day, Peyton Manning ended his career as a Super Bowl champion in a 24-10 win against the Carolina Panthers, announcing the end of his storied career in a postgame interview. 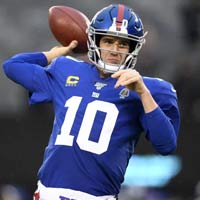 Brady’s Arrival: Tom Brady leads the Patriots to a 20-17 upset over the “Greatest Show on Turf” Rams, who came into the game as 14-point favorites. 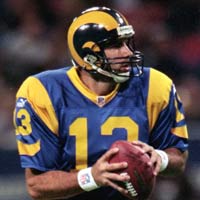 Warner’s Ascendance: Kurt Warner throws for 414 yards to cement the Rams’ status as the greatest offense in NFL history. 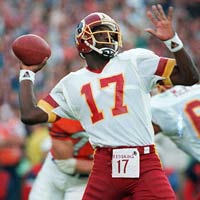 Doug Williams Blazes Trail: With a 42-10 rout of the Broncos, Redskins’ quarterback Doug Williams becomes the first black quarterback to both play in and win a Super Bowl. After an early 10-0 deficit, Williams exploded, completing 9 of 11 passes in the second quarter for 228 yards and four touchdowns. 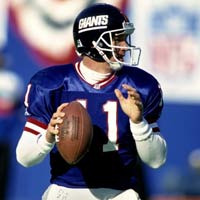 Simms Surgical Second Half – After trailing 10-9 at halftime against Elway’s Broncos, Phill Simms goes a perfect 10 for 10 in the second half to help the Giants cruise to a 39-20 win. 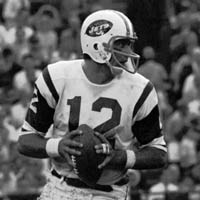 Namath Secures AFL Respectability: After two years of the NFL’s Green Bay Packers dominating the nascent AFL-NFL Championship Game (later renamed the Super Bowl), Joe Namath leads the Jets to a 16-7 upset of the Unitas-led Baltimore Colts. The Colts were favored by 18 points heading into the game, and this upset was proof that the AFL teams could hold their own with the more established NFL teams.