The Super Bowl boasts a proud tradition of defensive dominance. While quarterbacks are often associated with Super Bowl success, team defense is actually a better predictive metric of who will win the Lombardi Trophy than any offensive stat. Almost every team to win a Super Bowl, even those with elite offenses, features a great defense. If a Super Bowl team features a truly dominant defense as its heart and soul, chances are that defense will be immortalized with its own nickname.

From the Doomsday defenses of the Cold War-era Dallas Cowboys to the various eras of “Monsters of the Midway” Chicago Bears defense, some of the most memorable football ever played has come from the defensive side of the ball. For many, good defense is the purest form of football. Building an elite Super Bowl defense requires more than just two or three incredibly talented players. It requires total cohesion between all eleven players on the field, grit, toughness, and above all, intelligence. These things are difficult to cultivate consistently, but there’s a reason many of the greatest dynasties of the NFL time were driven by coaches with defensive backgrounds.

What Defenses Led Their Team to the Super Bowl?

Of the 55 Super Bowl-winning teams in NFL history, only eight featured a defense that ranked outside the top third of the league in points allowed. Of those eight teams, four featured a Hall of Fame or future Hall of Fame quarterback and two more featured possible Canton-bound Eli Manning. The only outliers are the 1980 Raiders, led by Jim Plunkett, and the 2012 Ravens, led by Joe Flacco but powered by the last vestiges of a formerly elite defense. There are plenty of examples of elite defenses carrying average quarterbacks and offenses to a Super Bowl victory, but few examples of the inverse. Nearly half of the 2021 playoff teams have defenses ranked in the top 10 of the league in scoring.

When coach Tom Landry made the jump from defensive coordinator of the Giants to head coach of the Dallas Cowboys in 1960, he brought with him both an understanding of winning culture and his revolutionary 4-3 Flex defense. This scheme, which formed the backbone of the Doomsday Defense, featured a variety of clever alignments, but its most important feature was the ability to run it out the Flex. The Flex is a defensive formation that empowers linemen to read and react to the offense after the snap, which allowed the defense to completely stifle then-common option blocking schemes.

The very best of Landry’s defenses earned the “Doomsday” moniker. The first generation of the Doomsday Defense featured three future Hall of Famers and six future ring of honor inductees. Combining that level of talent with a havoc-inducing scheme proved to be a successful marriage; the Cowboys finished in the top seven in the NFL in points allowed in seven consecutive seasons and held the Dolphins to just three points in Super Bowl V—still tied for the fewest of any Super Bowl team. After the game, linebacker Chuck Crowley became the first-ever defensive player to earn the game’s Most Valuable Player award. In 1979, the second Doomsday generation, led by Randy White, Cliff Harris and Harvey Martin, forced eight turnovers in a 27-10 rout of the Broncos. White and Martin were named co-MVPs of the game—the first and only teammates to do so. 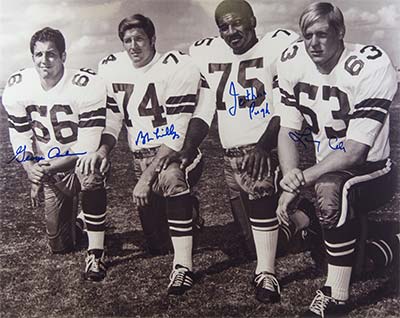 The Minnesota Vikings’ defensive line of the late 1960s and early 1970s earned this nickname by dominating the line of scrimmage and tallying obscene sack totals in an era when passing was relatively rare. The unit featured 19 total Pro Bowl berths between its four members: Hall of Fame tackle Alan Page had nine, Hall of Fame end Carl Eller had six, Hall of Fame snub Jim Marshall had four, and tackle Gary Larsen had two.

The People Eaters led a defense that ranked first in the NFL in fewest points allowed for three consecutive seasons (1969 through 1971). In 1969, they led the NFL in both passing and rushing defense. In 1971, Alan Page became the first and only defensive lineman ever to win the NFL MVP award. The Vikings tallied 142 sacks in these three seasons and forced 131 turnovers. Despite the gaudy numbers and physical domination, the People Eaters were never able to win a Super Bowl largely because of an anemic offense that totaled 20 points over their three appearances. Despite falling short on championship aspirations, the People Eaters are still synonymous with excellence along the defensive line and acted as a model for future defensive fronts. 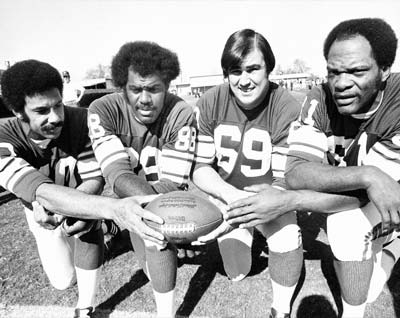 The Pittsburgh Steelers won four Super Bowls from 1975 to 1980. The franchise featured a Hall of Fame quarterback in Terry Bradshaw, but the most memorable component of these Steelers championship teams was the defense, known as the Steel Curtain. As with the People Eaters, the focus of the Steel Curtain defense was its defensive line, which featured Hall of Fame tackle “Mean” Joe Green, six-time Pro Bowl end L.C. Greenwood, and two-time Pro Bowl end Dwight White. The nickname comes from a contestant in a Pittsburgh radio contest and is a play on Winston Churchill’s notion of an “Iron Curtain” dividing the Soviet Union from the rest of Europe.

Across this half-decade of dominance, the Steel Curtain averaged 43.5 sacks per season. In their four Super Bowl appearances, the Steel Curtain allowed 14.8 points per game (not including defensive or special teams touchdowns by their opponents). The unit’s best performance came in Super Bowl IX, a 16-6 drubbing of the Minnesota Vikings in which they allowed just 119 total yards and forced five turnovers. Minnesota’s only points of the game came off a blocked punt. Even decades later, Pittsburgh maintains a reputation for defensive excellence powered largely by the legacy of the Steel Curtain. 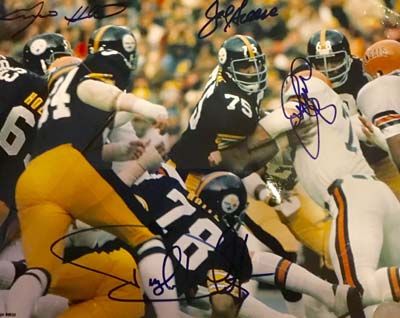 Monsters of the Midway

The origins of this nickname date back to the University of Chicago’s football team, which under coach Amos Alonzo Stagg became a perennial power. After the school ended its football program in 1939, the nickname became associated with the Chicago Bears, who won several NFL championships around the same time. The nickname experienced a resurgence in popularity during the 1985 season, in which the Bears went 15-1 and led the league in both total defense and points allowed. In the playoffs, the 1985 Bears shut out both the New York Giants (21-0) and the Los Angeles Rams (24-0) before beating the New England Patriots 46-10 in the Super Bowl.

The 1985 Monsters of the Midway featured three future Pro Football Hall of Famers: defensive end Richard Dent who led the NFL in sacks that season, linebacker Mike Singletary who won Defensive Player of the Year honors, and defensive tackle Dan Hampton who was named a second-team All-Pro. The nickname has a secondary association with Chicago’s history of elite middle linebacker play, including Hall of Fame inductees Bill George, Dick Butkus, Mike Singletary, and Brian Urlacher. 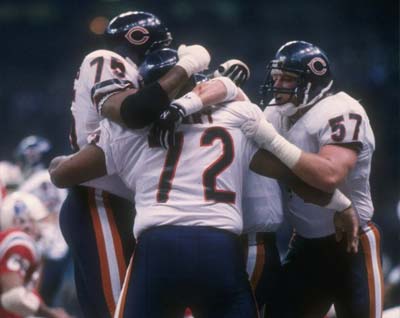 After a decade of futility in the 1970s, the New York Giants finally turned a corner in 1981 by clinching their first playoff berth in nearly twenty years and, more importantly, drafting Lawrence Taylor. The franchise continued to build throughout the early 1980s under the watchful eye of head coach Bill Parcells and defensive coordinator Bill Belichick as Taylor blossomed into one of the greatest players in NFL history. By plugging Taylor’s unique blend of athleticism and ferocity into Belichick’s brilliant 3-4 defense, the Giants evolved into one of the best teams of the decade, winning Super Bowls in 1987 and 1991.

In 1986, the roster had been filled out with other great defensive players, who helped power the Giants to their first-ever Super Bowl appearance and victory. After outscoring their first two playoff opponents 66-3, the Giants cruised to a 39-20 win over John Elway’s Denver Broncos. The linebacking corps of these Giants teams were nicknamed the “Crunch Bunch” and is viewed by many as the greatest such unit in NFL history. In 1990, the Wrecking Crew repeated its Super Bowl success, famously beating the favored Buffalo Bills 20-19 on a missed Scott Norwood field goal as time expired. 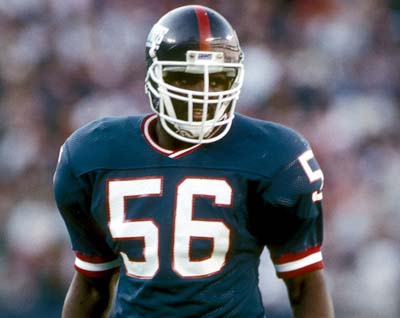 The Baltimore Ravens of the 2000 season aren’t as well-remembered as some of the other teams on this list, but statistically speaking, they might have featured the best defense of all time. Running a fairly conventional 4-3 scheme, defensive coordinator Marvin Lewis used the transcendent talent of Ray Lewis to anchor every facet of his defense, allowing Lewis unparalleled freedom to roam the field and make plays. Aside from Lewis, the unit’s defensive line had talented players like Peter Boulware, Sam Adams and Michael McCrary, while the secondary was patrolled by ball hawks Rod Woodson, Duane Starks and Chris McAlister.

The results speak for themselves. During the regular season, the Ravens allowed only 16 total offensive touchdowns, under 1,000 total rushing yards, and a paltry 5.7 yards per pass attempt. With opponents being forced to throw more to counter a stifling rushing defense, the Ravens tallied 23 interceptions compared to only 11 passing touchdowns allowed. During the playoffs, the team’s opponents averaged only 171 offensive yards and 5.8 points per game. Against the New York Giants in the Super Bowl, the Ravens intercepted four passes and recovered a fumble as they held the Giants offense scoreless. Ray Lewis was named the game’s Most Valuable Player. 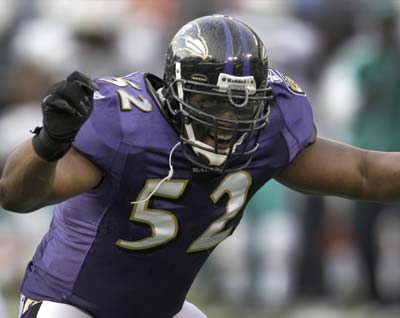 The Legion of Boom

In the late 2000s and early 2010s, the NFL experienced an explosion in passing powered by elite quarterback and receiver play, as well as a shift in the league’s prominent offensive philosophies. The Seattle Seahawks of the early 2010s were one of the first teams to craft a counter to these pass-heavy offenses. Rather than the traditional sub-six-foot defensive backs, the Seahawks fielded a unit of DBs who all stood six-foot-three or taller. Safety Earl Thomas was drafted in the first round in 2011, but the unit’s other three members (Richard Sherman, Kam Chancellor and Brandon Browner) were all drafted in the fifth round or later. Browner wasn’t even drafted but was instead acquired from Calgary Stampeders of the Canadian Football League.

Despite a seeming lack of star power, the Seahawks secondary became the most fearsome in the NFL by the end of the 2011 season. Before the 2012 season, Seahawks fans voted on a local radio station to nickname the secondary the “Legion of Boom”, and national outlets like ESPN immediately latched onto the name. From 2012 to 2015, the Seahawks led the NFL in points allowed in every season. In Super Bowl XLVIII, the Seahawks faced off against a historically potent Denver Broncos offense led by NFL MVP Peyton Manning. On paper, it looked like an all-time great matchup, but the game quickly turned into a laugher. On the first play of the game, Manning’s frantic audibling led to an unexpected snap that flew into the endzone for a safety. Late in the second quarter, a promising Broncos drive instead ended in a 69-yard pick-six. The game ended in a 43-8 Seahawks victory, and that still probably doesn’t convey just how thoroughly the Broncos were beaten. 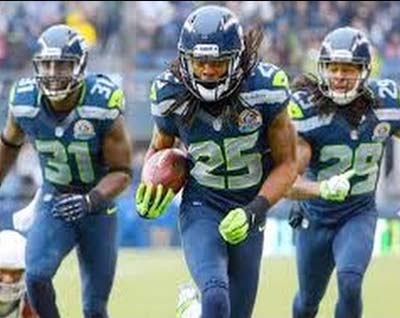 The 2015 Denver Broncos looked like a longshot to win a Super Bowl for most of the season. Despite relatively high preseason expectations, it quickly became apparent that Peyton Manning was not the MVP-caliber quarterback of past years. Despite the aging Manning rotating at quarterback with Brock Osweiler, the Broncos still managed to go 12-4 and win the AFC West. Led by defensive end Von Miller and cornerback Aqib Talib, the Broncos finished fourth in the NFL in points allowed and first in yards allowed per passing attempt.

To commemorate this defensive excellence, fans nicknamed the Broncos defense “The Mile-High No Fly Zone”, a nickname that traces its origins to Michigan State University’s 2012 and 2013 NCAA-leading pass defenses. After eking by the Pittsburgh Steelers and the New England Patriots to reach Super Bowl 50, the Broncos matched up against a 15-1 Carolina Panthers squad that ranked first in the NFL in scoring offense and total point differential. Instead of the Panthers blowout many were expecting, the Broncos completely stonewalled Carolina’s offense, holding them under five yards per play in a 24-10 victory. Von Miller was named the game’s MVP after recording two key strip-sacks of Panthers quarterback Cam Newton. 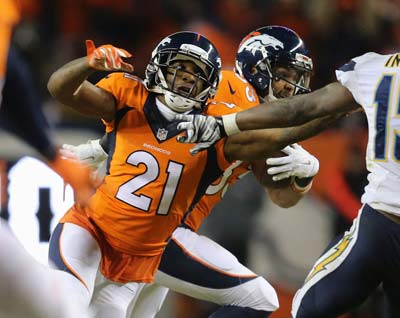