What Are The Biggest Bets Ever Made On The Super Bowl? 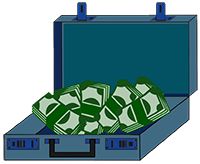 What are the biggest bets ever made on the Super Bowl? There have been a handful of wagers on the Super Bowl worth mentioning due to their high price tags. All of these wagers on the championship game are million-dollar bets. It’s hard to imagine your typical bettor wagering so much on one game but these bettors are high rollers with the means to lose money in large numbers if their team doesn’t win.

The biggest wager, a two-million-dollar bet was in 2010 when the New Orleans Saints beat the Indianapolis Colts 31-17. The Colts were the favorite to win with quarterback Peyton Manning at the helm and the wager was placed on them. Needless to say, the celebrity bettor lost their money when through the underestimation of Saints quarterback Drew Brees.

The second biggest bet or possibly the highest considering it was made in the ’80s was a million-dollar wager in 1989. That was Super Bowl 23 when the San Francisco 49ers beat the Cincinnati Bengals 20-16. The bet was placed by Bob Stupak also known as Mr. Las Vegas putting his money on the Bengals that were listed as the underdog coming into the game. At the time, the infamous Joe Montana was the quarterback for San Francisco, and he ended up winning the game for his team.

In 2011, when the Green Bay Packers played the Pittsburgh Steelers, there was a million-dollar wager placed on Green Bay to win it. The bet was placed by Birdman on the favorite because his buddy Lil Wayne was a fan of the Packers. No exact number was given to his payout when the Packers won 31-25 but he did tweet about “cashing in a milli” after the game.

Super Bowl 46 saw the New England Patriots face the New York Giants. The Patriots were favored to win and Birdman possibly placed a five million dollar bet which would make it the highest wager on a Super Bowl, however, other than speculation there is no real merit to the claim. Rapper 50 Cent placed a million-dollar wager on the New York Giants to win and made a pretty penny when the underdogs came out victorious 21-17.

In 2014, the Seattle Seahawks beat the Denver Broncos 43-8 in Super Bowl 48. The Broncos went into the game as the favored team to win it. This Super Bowl became one of the craziest ones to date in terms of sports betting. Las Vegas sportsbooks made out beautifully with earnings of twenty million due to the wild turn of events. Bettors were quite upset with the turnout, feeling as though bookmakers flipped the script on who the actual favorite was. But it was a freak occurrence that proved lucrative for the state of Nevada. This is what makes the art of sports betting both scary and exciting all at the same time.

The Biggest Bet Made On Super Bowl 56

Mattress Mack struck again at Super Bowl 56 placing the largest online and in person bets on Super Bowl 56 and both of them came on the Cincinnati Bengals moneyline. He first placed a $4.5 million bet using an online Super Bowl sportsbooks. Mack then traveled from his home state of Texas to Louisiana to place a $5 million bet.

A $250 Super Bowl bet turned into a $100,000 payout when the New England Patriots played the Los Angeles Rams and won 13-3. Given a 400-1 shot that the Rams would score only three points for the entire game, one bettor placed the bet with South Point Hotel, Casino and Spa in Las Vegas. The lucky person walked away a lot richer than when the game started. It was sheer luck that a field goal was the only points scored by the team. It’s also a great example of how sometimes taking the gamble does pay off.

Dropping Millions On The Super Bowl

A more recent example of large betting comes from Super Bowl LIII, which was between the AFC’s New England Patriots and the NFC’s Los Angeles Rams. The Rams had been dominant the entire season, wowing front offices around the country. The Patriots, meanwhile, had been dominant the entire decade, but oddly anemic during the season, unveiling a more run-heavy style of play for the playoffs that carried them to the Super Bowl. An anonymous bettor at MGM laid two separate moneyline bets on Super Bowl 53. One was risking $2 million, while the other was "much" less at $1.8 million. The Patriots went on to win the game 13-3, adding another piece of silverware to their already overflowing trophy case. That $3.8 million, meanwhile, was bet on... the Rams money line. However, the bettor probably didn't mind too much, as they won around $10 million betting on the Eagles during Super Bowl 52.

What State Bets The Most On The Super Bowl?

Known for placing the largest bet in Super Bowl history when he wagered 9.5 million on the Cincinnati Bengals via a variety of sportsbooks, Mattress Mack has placed many wagers on the Super Bowl over the years. Here are some of the bets the Houston betting legend has placed on various teams to win the Super Bowl, both as futures bets and as game bets.