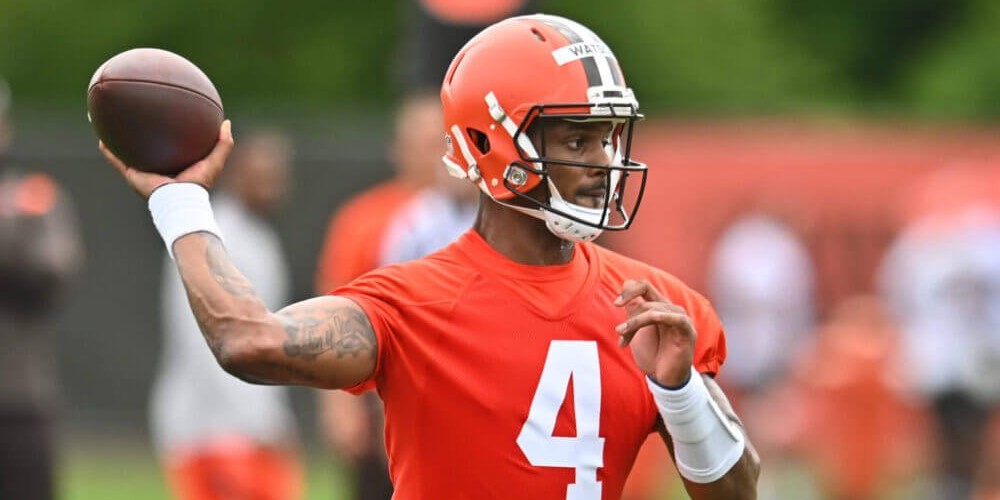 CLEVELAND – After being accused of more than 20 sexual assaults in a variety of civil suits, it is becoming more and more likely that Browns QB Deshaun Watson will be suspended for some portion of the 2022-2023 NFL season.

Will Deshaun Watson Play Week 1 For The Cleveland Browns

The NFL sportsbooks seem absolutely certain that Watson will not be playing Week 1 for the Browns, which implies that a suspension from the NFL will be coming before the season starts.

Will Deshaun Watson Play Any Regular Season Games For The Cleveland Browns In The 2022-2023 Season?

How Many Games Will Deshaun Watson Play In The 2022-2023 NFL Regular Season?

Based on these odds, it seems the sportsbooks are expecting something in the range of an 8-10 game suspension, with an outside chance of a year’s suspension.

The Browns, it seems, anticipated a possible suspension in the 2022-2023 NFL season when writing Watson’s contract.

Per Ian Rapaport, the Browns set Watson’s base salary as $1,000,000 in 2022-2023, but his whole contract has a $230m value over five years. Albert Breer of SI noted that this would limit Watson’s downside in the event of a suspension, as he’d be missing out on game checks of $55,000 instead of much larger game checks if the big money kicked in earlier.

A recent New York Times investigation revealed that Watson’s claims of having hired about 40 different massage therapists over his half-decade Houston Texans tenure were incorrect, and that the QB had actually hired more than 60 over only 17 months of that tenure.

Multiple online sportsbooks have taken odds on the Browns  off the table, presumably in response to the increasing heat on Watson, and the increasing likelihood of a significant suspension.

Both DraftKings and Bovada do not have odds on the Browns’ team O/U at this time, although the Browns are included in various futures wagers.

The Browns are already unlikely to win the AFC North in 2022-23, but a Watson suspension makes that even less likely – and it seems more and more likely that he will be suspended, based on these odds.