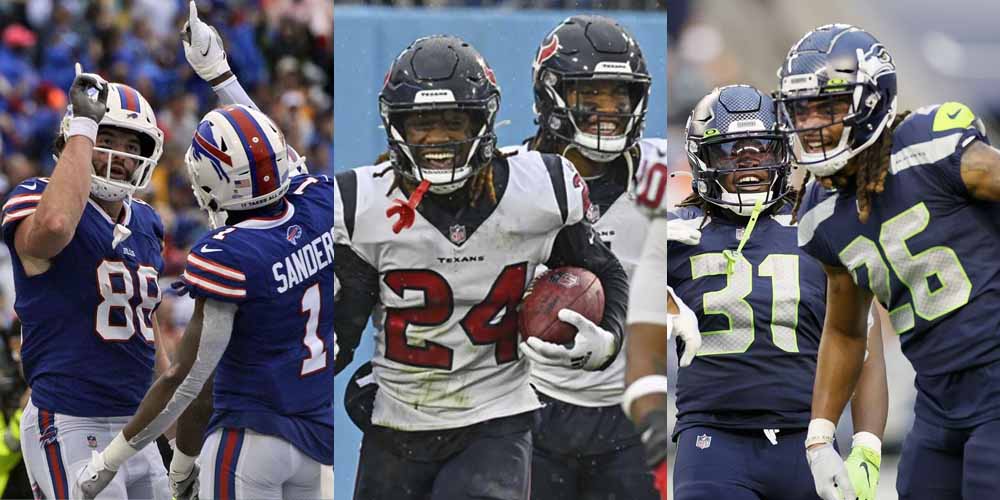 BUFFALO, N.Y. – The Buffalo Bills, Houston Texans and Seattle Seahawks are going to be among the top talking points after the Week 11 games and all for good reason.

Are The Buffalo Bills Frauds?

The Buffalo Bills started off the season as the most dominant team in the NFL. At one point, they lead the league in both scoring offense and scoring defense. However, much has changed over the last few weeks including the futures odds for Super Bowl LVI.

Buffalo has gone from being the favorite to being the fifth choice on the board after their recent struggles.

The Bills have lost two of the last three weeks and three of the last five as well. They no longer lead their division and are just 1-3 on the season against teams with a winning record.

Keep a close eye on this team moving forward as they cannot be considered Super Bowl contenders until something changes.

The Houston Texans Are Better Than People Think

After seeing that the Houston Texans beat the Tennessee Titans, most people will be quick to call it a bad loss for Tennessee. However, Houston is much better than most people realize, at least with Tyrod Taylor running the offense.

The Texans are 2-2 this season in games which Taylor plays in and 2-1 if not including the game in which he got injured in.

Houston is favored in their Week 12 matchup against the New York Jets and could be worth betting on since it seems as if nobody realizes just how competitive this team can be with Taylor under center.

Seattle Seahawks Will Have Worst Season In Over A Decade

The Seattle Seahawks are 3-7 on the season and are now in danger of having one of the worst seasons in recent memory. The last time the Seahawks had a season below .500 was back in 2011.

A sub .500 record seems all but a guarantee at this point, but just how bad can it get?

They still have the San Francisco 49ers, Los Angeles Rams and Arizona Cardinals on the schedule as well as the Chicago Bears, Detroit Lions, Houston Texans and their Week 12 matchup, the Washington Football Team.

Although favored, the Seahawks may be a good team to bet against on NFL betting sites considering the team has scored 13 or fewer points in three of the last four weeks.