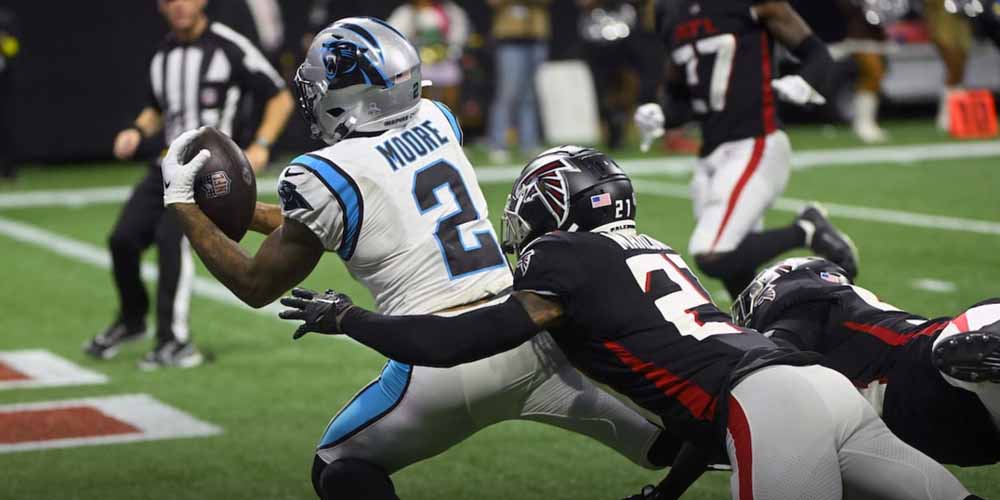 After trailing by 6 points with 12 seconds left in the game, PJ Walker connected with DJ Moore on a 62-yard hail marry to the endzone in what many thought was going to cash the Panthers +165 NFL betting odds. However, Moore was tagged with an unsportsmanlike conduct flag for taking his helmet off in the endzone and screaming “F*ck Ya’ll” to the fans. This caused the extra point attempt to be pushed back an extra 15 yards making it a 48-yard attempt.

Panthers’ kicker, Eddy Pineiro, went on to miss the extra point leaving the game tied at 34 points each and heading for overtime. In the OT period, the Panthers were putting on what seemed to be a game-winning drive that set up Pineiro for a 32-yard field goal that he shanked once again setting up the Atlanta Falcons and Younghoe Koo for a game-winning 41-yard kick.

The bad beats started early in Week 8 with Tom Brady laying a horrible beat for those that took the under on his passing yard total. Bovada had set Brady’s passing yard total at 324.5. On the Tampa Bay Buccaneers final drive of the game, Brady had 317 yards with 49 seconds left on the clock. In a fourth-and-goal situation, Brady connected with Julio Jones for an 8-yard score that cashed the over by just half a yard and left Brady with 325 passing yards on the night.

Following Brady’s bad beat, Lamar Jackson joined in on the fun as well with a bad beat of his own. Jackson’s Raven’s player odds had an alternate rushing yard total set at 45 yards. Jackson had exactly 45 rushing yards in the Ravens final drive to close out the game. All that was needed to finish the game was two kneel-downs where Jackson did the honors. In those kneels though, Jackson lost two rushing yards and finished the game at 43 yards causing a losing bet.