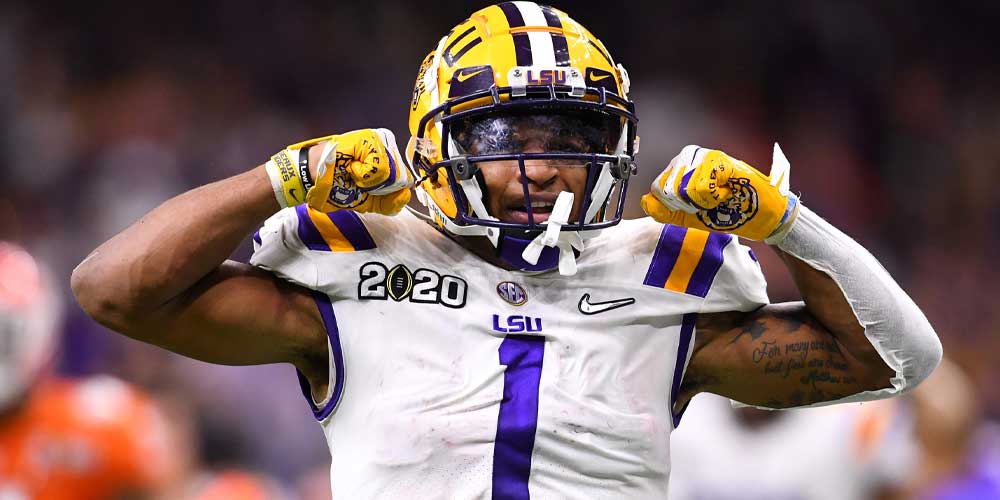 CLEVELAND – The NFL Draft is only weeks away and sports betting fans are starting to place heavy action on prop bets at online sportsbooks.

Ja’Marr Chase, WR from Louisiana State University (LSU) is getting a lot of attention from both teams and sports betting fans.

With the star WR having the shortest odds to be the first WR selected in the draft, NFL Draft betting fans are also placing action on the over/under for his selectin number.

Selected at What Number Ja'Marr Chase

Ja’Marr Chase is viewed as the best WR in the draft after coming off of a career junior season at LSU. Chase finished the year with 84 receptions for 1,780 yards. Chase also had a career-high 229 receiving game against Vanderbilt on the year.

This impressive college performance has successfully raised his draft stock. Chase has -700 short odds to be the first WR selected in the draft and his Pro Day performance only managed to increase team interest.

Looking at teams with the top six picks in the draft, we can infer where Chase would be selected should he be a top-six pick.

The Atlanta Falcons with the No. 4 pick, the Cincinnati Bengals with the No. 5 pick, and the Miami Dolphins with the No. 6 pick are who betting fans taking the under at -200 are expecting to lean towards Chase.

Any of these teams could potentially lean in on Chase, specifically Miami and Cincinnati who would both be looking for a WR to pair with their young QBs drafted in the past NFL Draft.

The Falcons could move in another direction, however, as TE Kyle Pitts has started to gain some traction from teams scouting him. With Julio Jones expected to be back next season, adding a young WR next to the All-Pro may not be in the best interest for Atlanta.

Adding a TE on the other hand would only increase the weapons that Matt Ryan would have at his disposal.

Cincinnati on the other hand has a glaring issue that needs to be resolved, their offensive line is one of the weakest in the league.

In only 11 weeks, rookie QB Joe Burrow suffered a season-ending injury which is likely a wake-up call to the front office who spent the No. 1 overall pick in the 2020 Draft on him.

Penei Sewell, who is considered the best OT in the draft, is likely to still be available and will be hard for the Bengals to pass up on.

This leaves Miami, who would have no real reason not to draft Chase other than the other WR still available.

While betting on the Miami Dolphins to select Chase with the No. 6 pick seems like no-brainer, it is important to note that WR DeVonta Smith and Dolphins QB Tua Tagovailoa have a relationship.

The pair played together at the University of Alabama and Miami could potentially lean in favor of drafting Smith over Chase to better their Super Bowl odds.

Longshot betting fans looking at the +150 longshot odds on the Over could cash in big should these teams move in another direction.