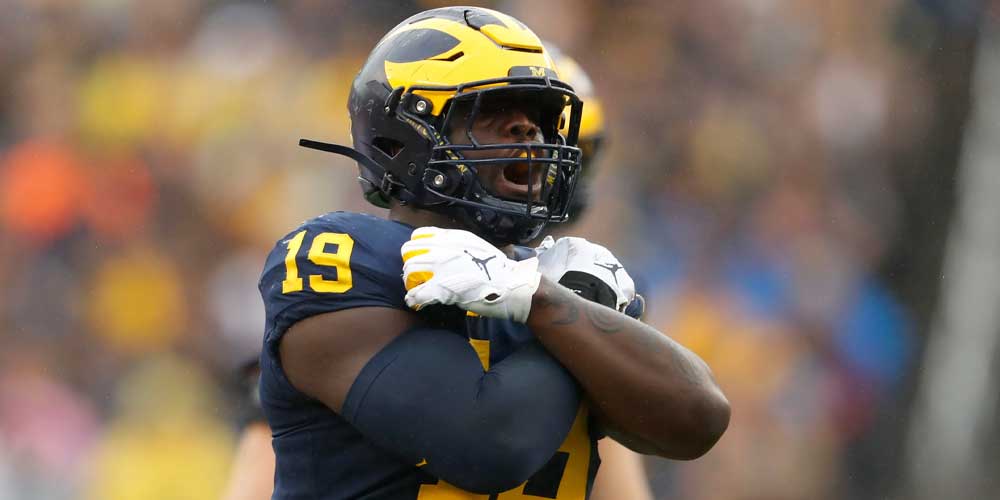 CLEVELAND - With the NFL Draft approaching, NFL bettors can begin looking at the different odds that come with the draft such as which defensive lineman will be the first taken off the board.

NFL sportsbooks currently have Kwity Paye from the Michigan Wolverines as the heaviest favorite to be the first lineman drafted, however, bettors should not be so quick to jump on his odds.

Paye is heavily favored to be the first defensive lineman drafted in the NFL Draft and some might think that this is surprising after having what some consider was a down year. Paye finished his season with 16 total tackles which include 12 solo and four assisted. Not to mention he also had two sacks as well.

However, in his career, he has posted 99 total tackles which is the most amongst the players sitting with under +1000 odds to be the first defensive lineman drafted. Paye also recorded 11.5 sacks in his career as well.

Being that Paye has proven that he is an elite lineman considering his tackling, he is a safe bet to make.

Those NFL bettors that are looking for longer odds to bet on cannot go wrong with Jaelen Phillips. In his career, Phillips posted 86 total tackles and 12.5 sacks in which he recorded 45 of those tackles and 8 of those sacks in just his final season after transferring to the Miami Hurricanes from the UCLA Bruins.

His final season alone should be enough of a reason for NFL bettors to consider betting on him being the first lineman drafted. Phillips will certainly look to up his intensity when he is drafted and that being said, he would also make a great bet that could end up paying out well for NFL Draft bettors.

Bettors that are willing to take an even bigger risk can take a look at Christian Barmore for one main reason and that is that he is coming out of the Alabama crimson Tide. If any bettors know one thing about the NFL Draft, it is that Alabama players are at the top of most teams scouting reports and draft boards.

Not to mention, they have been pumping out quality defensive lineman in the last few drafts such as Quinnen Williams, Dalvin Tomlinson, and A’Shawn Robinson who were all first-round picks and are currently starting on their respective teams.

As for how Barmore did this past season for the Crimson Tide, he advanced in almost every category as he went from 26 to 27 total tackles, 12 to 15 solo tackles, and 2 to 6 sacks. Being that he has proven his potential, teams could be willing to take a chance on him early on in the draft which could cash out bettors.

The NFL Draft is set to begin on April 29 at 8:00 p.m. EST from Cleveland, Ohio, and will be exclusively aired on NFL Network.