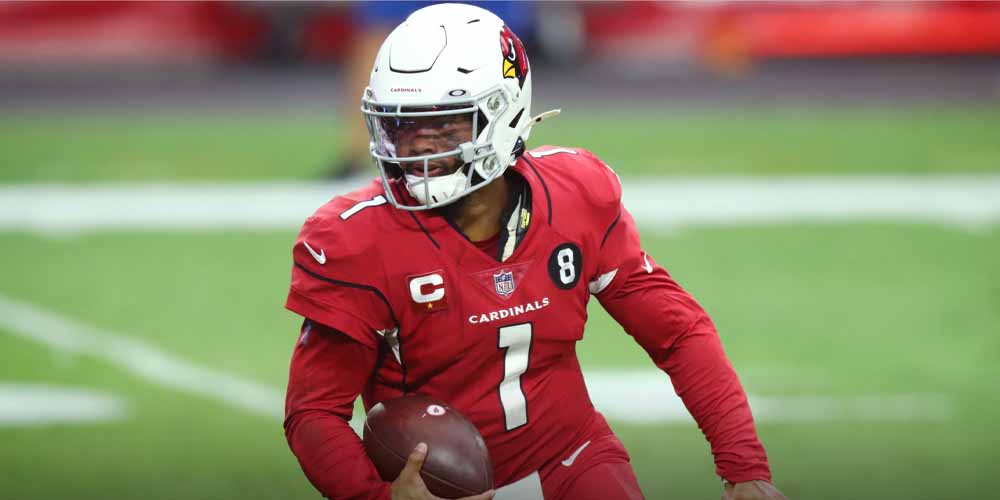 NEW YORK – After the conclusion of the Week 4 NFL slate, several players saw their odds to win the 2021 NFL MVP award get a big boost, while several also saw their odds dramatically worsen. The biggest beneficiary was QB Kyler Murray, who saw his betting line improve as the favorite in the league to win the award.

Kyler Murray has improved his odds to win the 2021 NFL MVP Award to (+500), replacing Tom Brady as the player with the best odds in the league heading into Week 5.

Coming into Week 4, Murray’s odds to win the award were outside of the top five; however, after an impressive individual and team performance in Arizona’s 37-20 win over the Rams as 4-point underdogs, his odds improved dramatically and he currently sits as the favorite to win the award.

In Week 5, Murray and the undefeated Cardinals take on the San Francisco 49ers as 5.5-point favorites with (+205) moneyline odds.

Patrick Mahomes’ odds to win the NFL MVP Award have fallen to (+600) – still good for the second-best in the league – after holding (+450) odds to win the award last week.

Mahomes did all he could to prevent the decline of his MVP odds in the Chiefs’ 42-30 win over the Eagles as 7-point favorites, as he completed 24 of his 30 passes for 278 yards and five touchdowns, also adding 26 rushing yards on 5 carries. He outplayed his projections in the win, going beyond his passing touchdowns prop of 2.5 (EVEN) and his rushing yards prop of 14.5 (-110).

Mahomes’ odds decline may be the beginning of a trend – his Kansas City Chiefs have the most difficult remaining schedule in the NFL, with their remaining opponents holding a combined .653 winning percentage.

Next week, Mahomes and the Chiefs take on Buffalo and their stout defensive unit that has allowed the fewest passing yards in the NFL. Kansas City currently sits as 2.5-point favorites (-110) with (-140) moneyline odds for that matchup.

Josh Allen’s odds to win this year’s MVP Award have leaped to the third-best in the league after being outside of the top five last week.

Allen’s improvement in odds comes on the heels of a solid performance in the Bills’ 40-0 win over the Houston Texans. Allen completed 20 of his 29 passes for 248 yards and 2 touchdowns, while also adding 41 rushing yards on 6 attempts. Allen surpassed his rushing yardage prop of 30.5 (-133) but fell short of each of his passing props. This was more due to the game script than a lack of performance on his part, as the Bills attempted 40 rushing plays compared to 30 passes.

Allen should be a mainstay in the top five for the remainder of the season, with the Bills having the second-easiest remaining schedule in the league. Their remaining opponents hold a collective winning percentage of just .365, which should open the door for some impressive performances from Allen.

The Bills take on Kansas City in Week 5 as 2.5-point underdogs with (+130) moneyline odds.

The dramatic degradation of Brady’s odds comes after a disappointing showing against the New England Patriots by the QB and the Bucs in Week 4. Tampa managed to win the game 19-17 but failed to cover the spread as 6.5-point favorites.

Brady was not his usual self, completing just 22 of his 43 pass attempts for 269 yards and no touchdowns while falling short of each of his passing props.

Some of the lack of production can be attributed to poor weather conditions, as a steady rain was present during the vast majority of the game; the rest can be attributed to Bill Belichick’s familiarity with Brady, allowing him to dial in a defensive scheme that limited his weapons.

The Bucs take on the Miami Dolphins in Week 5 and currently sit as 10-point favorites with online sportsbooks. Expect Brady to get back on track against Miami, making this a prime opportunity for believers in the “GOAT” to get discounted odds on the player while they can.

Los Angeles Chargers quarterback Justin Herbert rounds out the top five players with the best MVP odds heading into Week 5 with his jump to odds of (+850).

Herbert’s leap into the top five comes after a strong Week 4 showing in the Chargers’ 28-14 victory over the Las Vegas Raiders as 3-point favorites. Herbert completed 25 of his 38 passes for 222 yards and 3 touchdowns, though he failed to surpass any of his passing props.

After a slow start that saw Herbert throw just 2 touchdowns compared to 3 interceptions in the first two games of the season, the quarterback seems to have gotten back on the right track; in his last two games, Herbert has thrown 7 touchdowns with no interceptions, winning both games against tough opponents in the Chiefs and the Raiders.

Jerad began his interest in sports betting after finishing his athletic career in college. As the closest thing to playing, he quickly developed a passion for the industry. When he is not writing about sports, you can find him coaching high school baseball, reading political theory, or playing his guitar.