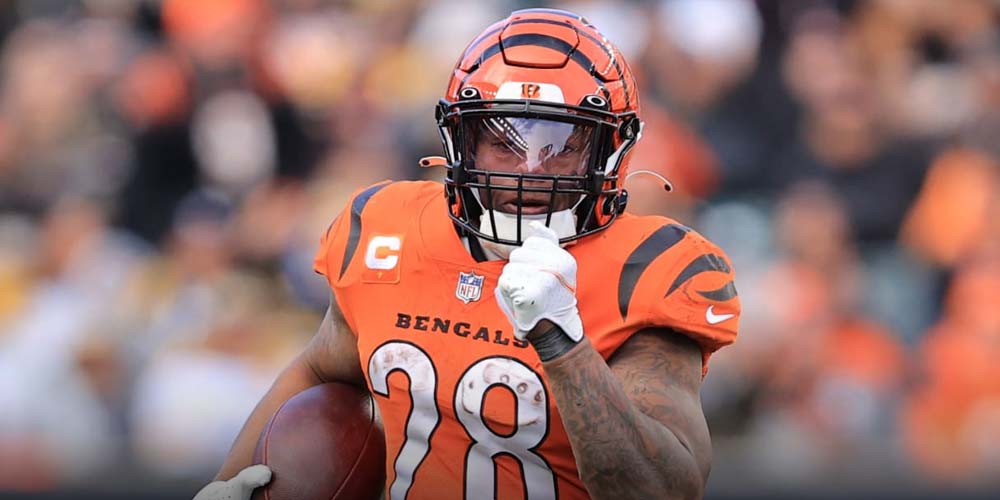 CINCINNATI – Joe Mixon will be among the most dynamic players on the field in the Cincinnati Bengals playoff game this weekend and his prop betting lines reflect that.

Mixon is not only a threat in the rushing game, but in the receiving game as well. He averaged 19.6 receiving yards per game this season and even saw his usage go up later in the season.

NFL betting sites have his yardage total set below his season average.

The Las Vegas Raiders haven’t been the best in shutting down running backs in the receiving game either. They allowed opposing RBs to tally 37.9 receiving yards per game this season. The OVER could very well be a good bet to make here.

If Mixon is going to hit the OVER in his receiving yards, it’s likely the same can be said for his reception total.

This time, even the NFL odds are in favor of the OVER.

Mixon finished the season with 13 catches in his last two games of the season, showing the added emphasis the team has had in getting him the ball in the passing game. The Raiders allowed 5.9 catches a game to running backs which should leave Mixon ample opportunities to go over this total as well.

Despite the set line being set right at Mixon’s season average, there’s good reason to bet the UNDER on his rushing yards prop. He averaged 75.3 yards per game, but he fell short of the set mark in each of his final five games of the season.

Not only did he fall short often to finish the season, but overall as well.

Mixon only had 76 or more yards five times in his 16 games this season. It wasn’t a matter of volume either, Mixon had averaged fewer yards per carry than his season average in each of his last five games as well.