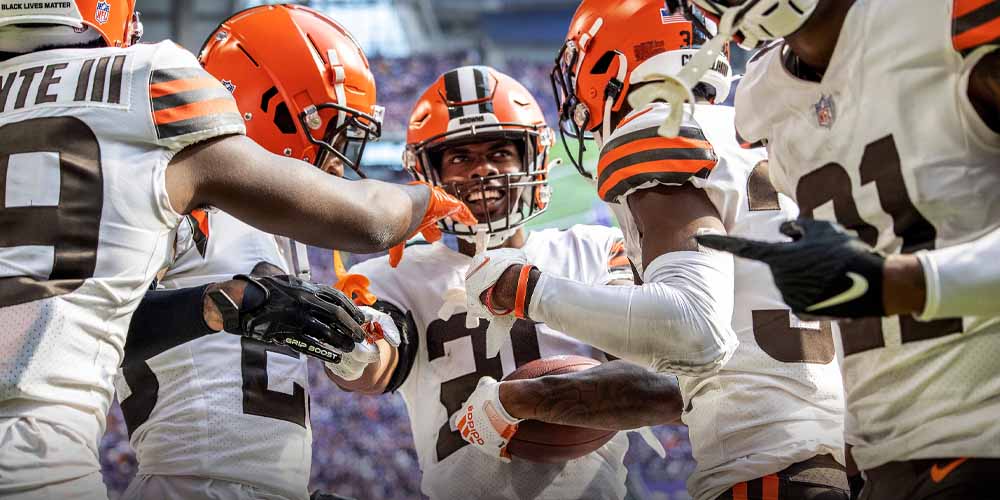 CLEVELAND – The Cleveland Browns have arguably the most hype surrounding them after coming off of their first playoff run in 18 years. However, some might think that the Browns are given too much credit and their odds reflect that.

Currently, Super Bowl 56 odds have the Browns at +1400 which is good for the eighth shortest odds amongst all of the teams in the league.

A Tough Road Ahead

Firstly, the Cleveland Browns have gotten off to a respectable 3-2 start to their season, but some of those wins have not come easy. Two of them came against teams that have a below .500 record in the Minnesota Vikings and Houston Texans. When they did face premier competition in the Kansas City Chiefs and Los Angeles Chargers, they were unable to pull off a victory.

Their outlook for the rest of the season has them tied for having the second-toughest schedule in the league for all of their remaining games. Of these 12 games left on their schedule, eight of them are against teams with an above .500 and four of them are against current division leaders.

The Browns are currently sitting outside of the playoff picture and if their schedule is any indication, they will have a tough time making their way back in.

While Cleveland is coming off of an impressive 2020 outing that saw them make a run to the divisional round of the playoffs, they are still not as experienced as other teams in the AFC. More specifically, teams like the Kansas City Chiefs, the Baltimore Ravens, the Pittsburgh Steelers, and even the Tennessee Titans have a lot more postseason experience than the Browns do.

At the end of the day, it all comes down to QB Baker Mayfield and his experience, as he is the leader of the offense. If the Browns make the playoffs down the road, there is no doubt that his experience will lead them to a potential Super Bowl, but with this team, it is unlikely that he will be able to lead the Browns to anything past the divisional round this year.

Right now, the Browns have a 67% chance to make the playoffs with just an 8% chance of getting a first-round BYE and a 6% chance of winning the Super Bowl.

Over the past few seasons, the Browns have not had any luck with the injury bug. They have dealt with injuries to key players like Nick Chubb, Odell Beckham Jr., Jarvis Landry, and Denzel Ward.

Through the first five weeks of the season, the Browns have not played with a fully healthy receiving car as either Odell or Landry have been out for each game.

On defense, they are dealing with injuries to both of their starting cornerbacks, Denzel Ward and Greedy Williams due to a neck and shoulder injury, respectively.

As long as the Browns continue to deal with injuries, they will always face setbacks against any team they play either in the regular season or the playoffs.