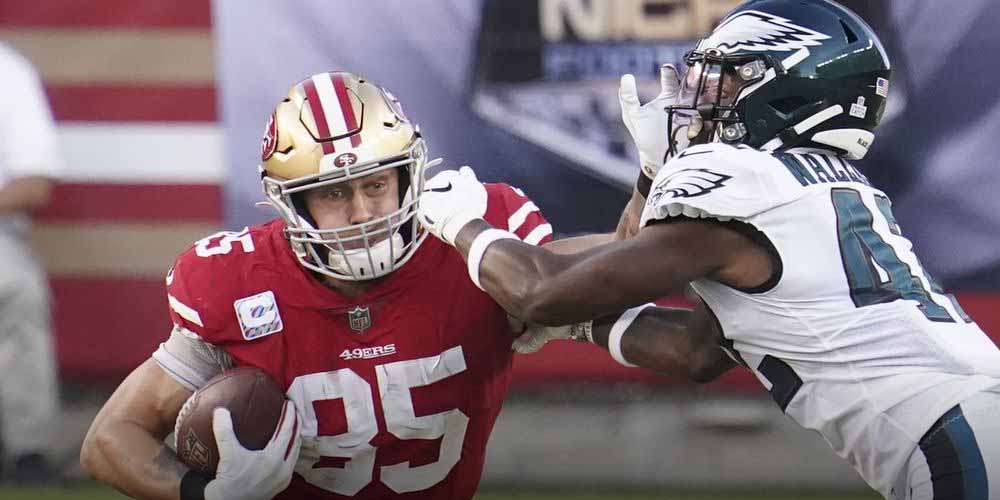 PHILADELPHIA – NFL sportsbooks favor the Philadelphia Eagles for each quarter, half, and straight up as they host the San Francisco 49ers in the NFC Championship Game.

The Eagles have had a lead at the end of the first quarter in only three of their nine home games.

This may appear like a low number at NFL betting sites for those who watched the Philadelphia Eagles score 14 first quarter points in their pummeling of the New York Giants last Saturday night.

The Giants defense doesn’t begin to compare to the 49ers defense that has not given up a first quarter point to either of their postseason opponents. The Seattle Seahawks and Dallas Cowboys both rank in the top 7 for points per game in the first quarter this season.

In opposition to San Francisco’s stubborn first quarter defense, the Philadelphia Eagles offense averages 5.7 points per game in the first quarter this season, which ranks fourth in the NFL.

Despite their convincing final scores, the Niners have struggled to lead at halftime as of late. They have been tied or losing at halftime in three of their last five games.

The Eagles have only trailed at halftime twice across Jalen Hurts’ 16 starts this season.

The first half total of 22.5 has gone over in three of the last four 49ers games.

When Jalen Hurts starts at home, the total at halftime has gone over 22.5 in seven of eight games.

Across their last five games, the Niners have given up an average of 8.8 points in the second quarter.

The narrow point differential on NFL sportsbooks is no surprise considering how evenly matched these two squads are on both sides of the ball. The NFC Championship Game kicks off at 3 p.m. EST on Sunday afternoon.

Zach is currently a student enrolled at Florida State University. He is majoring in Writing, Editing, and Media with a minor in Communication. He has a passion for sports writing and most enjoys writing about football and baseball both professional and collegiate. During his free time, you can find playing team sports, watching games, or playing DFS. Still searching for his first Fantasy Football Championship, he has been the runner-up four years in a row.