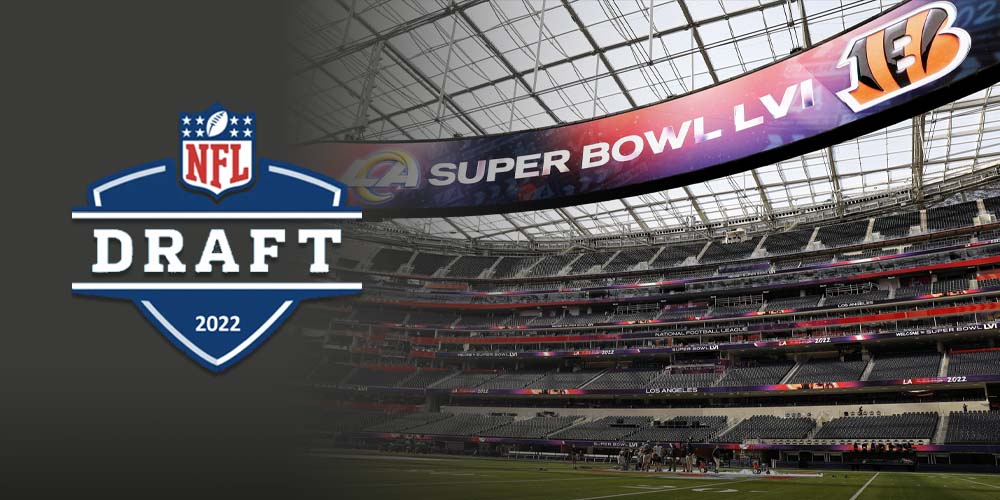 LAS VEGAS – There were plenty of storylines that unfolded after the first round of the NFL Draft came to a close. Some teams had incredible drafts while others made some questionable moves. Overall, now is the time to check in on Super Bowl odds following the first round.

Jets Order Three #1’s And A Side Of Sauce!

Many could argue that the New York Jets were the ultimate winners of the NFL Draft after selecting three players in the first round.

With the #4 pick, they added some much-needed, and very skilled depth to their secondary with the selection of Ahmad “Sauce” Gardner, who many believed was the top DB in the draft.

At #10, they continued building an offense around Zach Wilson by selecting an explosive receiver in Garrett Wilson who finished his career at Ohio State with 23 touchdowns.

They then made a surprise jump back into the first round by trading for pick 26  from the Tennessee Titans and selecting edge rusher, Jermaine Johnson, who was a projected top-15 pick.

Following the first round, the Jets Super Bowl odds still remain towards the bottom of the board at +15000 where they were before the draft. However, if their draft hot streak continues in the later rounds, their odds could certainly see a spike.

1st Round Draft Grade: A

There is no doubt that the Carolina Panthers are in need of a quarterback and many thought that they would select one with their no. 6 pick. However, there were arguments that taking a QB that early would be a major reach.

With that, Carolina opted to build for a QB selection with one of their later picks by taking arguably the best offensive tackle in the draft, Ikem Ekwonu.

In 829 snaps with NC State, Ekwonu allowed just two sacks. This is an incredible addition for a team that allowed the fifth-most sacks in 2021.

The Panthers would need to trade up into the second round to select one of these QBs, but there will be plenty of talent to choose from at the position such as Malik Willis, Matt Corral, and Desmond Ridder.

Their Super Bowl odds before the draft were at +10000 and remained put, however, depending on if they are able to select a QB, their odds could see a shift down.

1st Round Draft Grade: B

The Green Bay Packers had not one, but two chances to select an offensive player, most notably a receiver in the first round of the draft.

However, in a gut-wrenching move, they went with two players on defense in linebacker Quay Walker and defensive tackle Devonte Wyatt.

The receiver room is one of the top positions the Packers need help in after losing both Davante Adams and Marquez Valdes-Scantling in the offseason.

The fact that they did not go with a receiver is eye-opening, especially since they do not pick again until late in the second round (picks 53, 59) when top available receivers such as Christian Watson, John Metchie, and George Pickens likely won’t be available.

This also extends a terrible first-round draft streak for the Packers as they have selected just one offensive player in the first round since 2012. Even then, the player was Aaron Rodgers’ backup, Jordan Love.

Their odds to win Super Bowl 57 are currently at +1000, but unless they can make a move on offense, and quick, they could be sliding down soon.